Sailing Into the Storm

After a summer of carefully navigating tides, currents and avoiding long passages with poor weather I had to wonder to myself - did I try too hard to avoid inclement weather?  How will we learn unless we push ourselves a little bit?  I know the thrust of my efforts were to introduce the kids to sailing full time without turning them off with bad weather.  So, when it finally came time to head down the West Coast without kids and with a crew eager for adventure and experience - we took the opportunity to sail into a storm, push our comfort zone and see how Agamere performed.  We were not disappointed.


We knew it would be a few days until some good winds picked up off of the coast of Washington and Oregon but we were eager to get started.  Our plan was to head 40-50 miles offshore to see the deep blue water of the Pacific, knowing that we might have to head inshore to hideout in Coos Bay or Newport while the wind and seas off N. California abated.  On Sept. 5th we needed to make the call - to head inshore and wait or keep going and see what 25-35 knot winds were like out in the ocean.  We finally made the call after much crew discussion and decided to continue heading South where within 24 hours we would encounter building wind and seas. 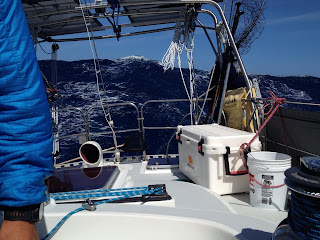 The gradual onset of the storm was a perfect intro to heavy weather sailing.  Winds built on the evening Sept. 6th from 10 kts to 20 kts and seas grew accordingly to 5-7 ft.  By noon the following day the wind had increased to 25-28 kts and seas had grown quickly to 9-10 ft.  By early afternoon the waves had taken on a new look with large sets of 20 ft waves picking up Agamere and rushing past her.  The effect on deck was one of awe - intense wave watching all day.  The crew was officially in the biggest Pacific Ocean waves of their life! 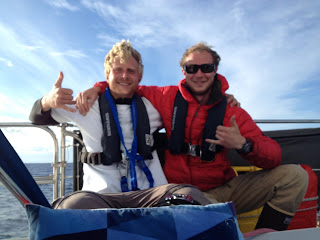 Below decks was another realm- loud, shuddering, with the mast jerking loudly during wind gusts and wave action, the autopilot groaning and the wave motion from all directions rattling even the most securely packed dishes and boat accessories, not to mention the crew off watch who were trying to rest.

As the evening progressed, the winds picked up continually until we were seeing 28-34 kts of wind and gusts up to 40 kts.  The waves just kept towering higher and higher and started to blow over at the top.  It was most impressive. 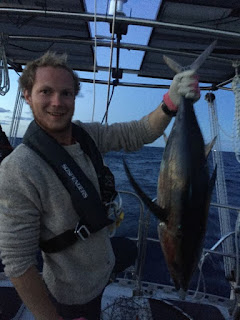 Heading into dusk as a storm is peaking is certainly not for the faint of heart!  The four of us sat together in the waning light wondering what the starry night would bring (I liked to think of it as Disneyland's Space Mountain ride on acid).  Suddenly we realized that a larger wave had picked up our fully reefed 40,000 lb boat and we were momentarily surfing at 15 kts (twice our avg cruising speed)! It was the perfect parting gift of this particular windstorm.  Our eyes were wide and our adrenaline was running thick. 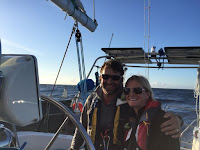 After exiting the windstorm, the waves took about twelve hours to settle down at which point we were able to head directly East towards San Francisco between beautiful, large, well spaced swells with full sails up and 15 kts of breeze (which seemed suddenly like child' s play). We unwound, ate real food including the delicious tuna Cory had caught just as the storm was picking up, and reveled in our new found experience - both humbled and impressed by the Pacific Ocean.