Kids are back on board!

We reunited with kids in San Fran (thank you Aunty Whitney for flying them down!).  Since then we have seen everything from China Town to the Jelly Belly factory to a wonderful winery in Napa (yes, we did the jelly belly factory and winery on the same day!). 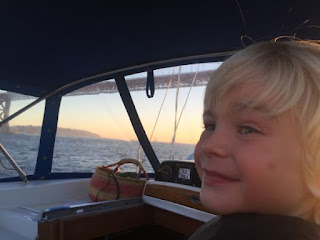 After almost a week in San Fran, we felt ready for our first leg down the coast with kids.  We decided to expose the kids to all of it at once - coastal sailing and an overnight combined.  The energy aboard was palpable as we went under the Golden Gate bridge.  I resisted the urge to tell the kids to calm down and just soaked it up.  They were in life jackets and harnessed in for the first time.  The bridge, the light, the dolphins - they were all part of the magic.

With an outgoing current and decent winds, the seas kicked up just as the sun went down.  Not the best combo for the first night at sea!  Before long, Maggie had hurled her dinner in the cockpit and both other kids came back above decks to try and rid themselves of the seasickness.  It was a tenuous first night at sea, wondering if we had done the right thing.  But, within a few hours the seas had calmed down considerably and all kids were sleeping on deck and we were able to migrate them downstairs where it was quite comfortable.

We pulled into Half Moon Bay just after midnight and navigated the entrance buoys beyond the breakwater until we found a little spot to put down our anchor and get some rest.  The kids awoke to a world filled with pelicans and fishing boats and after we fueled up - lots of flies!  Fly swatting and dodging shrimp pots filled the first few hours of our journey to Santa Cruz.   Santa Cruz did not disappoint with whales, dolphins a great beach and a fun boardwalk to entertain. 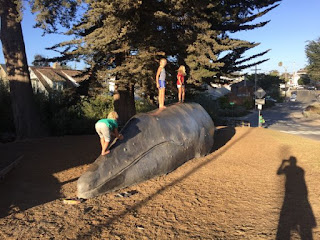 After a few days in Santa Cruz, we headed off for Monterey.  As soon as we were off the dock the winds picked up to 20-25 kts and with a double reef and a partially furled headsail off we flew at 7-8 kts in big swell and white capped wind waves.  Simi eyed us warily - as if to ask "is it always going to be like this?  Big wind, big waves."  We aren't sure yet, but did enjoy the sail after everyone got used to the rhythm of the wind and seas.  Monterey seems like a hard place to leave with its endless cultural history, amazing marine diversity, 5 star aquarium and a walking/biking path that is the envy of any good city.