Off the Dock at last!

We officially shoved off the dock in Port Madison at 05:30 am on Monday, July 13th.  With one extra 10 year old crew member aboard we had six total - the adult crew of two greatly outnumbered by children!  Not to worry, currents of +2 knots carried us quickly up Admiralty Inlet with calm seas and lots of shipping traffic.  Nick had helped me off the dock in Port Madison then went back to sleep after a long night of packing up Agamere with all of her essentials that had spread out on the Roose dock during the last month.   Alone at the helm, with the first rainy morning in a long time, I couldn't help but enjoy the early morning hours alone. 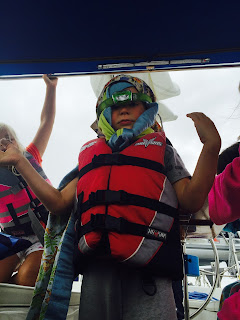 The crew finally started stirring just as we reached the Straits of Juan de Fuca.  I was presented with a costume dress up by William with his blanky overhead, headlamp on top of that and a special dance up the companionway stairs-complete goofiness that spread to Maggie, Simi and Zoe and set the tone for our whole crew.

The Straits were about as nice as they get with 10-15 kts of wind abeam, engine off, waves but little chop and several other smaller sailboats to cross with.  The currents that pushed us north out of Puget Sound continued to assist us as the tide turned and waters began flushing back into the Salish Sea and up Haro Straits.  Pink salmon (or Humpy's) were leaping out of the water all along the Western shore of San Juan Island-reminding us that we must brush up on our salmon fishing skills. 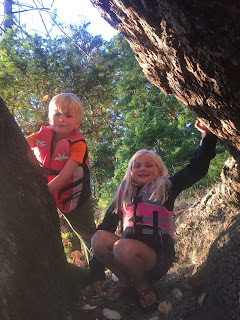 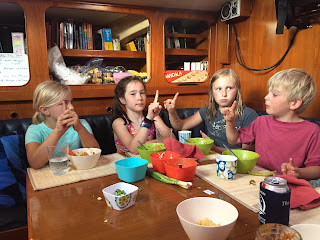